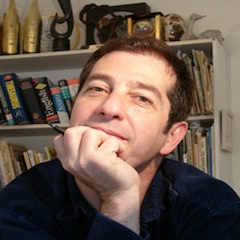 Director and Editor in Chief - Stephane

How did you become cartoonist ?  and why ?

I’ve been drawing in a cartoony style since I was very young, maybe about four years old, and from the age of about eight I wanted to become a cartoonist. I loved (and still love) Tintin and Peanuts. When I was a teenager I somehow lost confidence in cartooning, partly because as a white male, I was eligible for conscription into the apartheid army, so I felt I had to do something more academic at university to stay out of the army.

I did architecture for a few years and while travelling during my practical year, I went to Hergé’s studio in Brussels and met Uderzo in Paris. I decided I had to go back to my real passion, cartooning. Unfortunately this meant I had to go to the army first. I refused to carry a gun and got involved in the anti-apartheid movement while still in the army. During this time I taught myself cartooning.

Best part of your job? what do you particularly like?

What I love about cartooning is the combination of disciplines. I love drawing, but I also love words and the exercise of creating tightly edited pieces of text, taking the readers’ eye for a walk. There’s also the political knowledge one has to have and the passion for what goes on around you, and there’s the understanding of the conventions of comic strips.

So cartooning is a fascinating mix of all of this. I certainly also enjoy readers’ reactions to the cartoons and the subsequent discussions in print and electronic media.

What are your purpose when you draw ? Create awareness, changing mentality, behaviour ?

I believe in advocacy, so I like saying things strongly and sometimes controversially. In this way I actively take part in debates, although I think it’s unusual to find a cartoon that on its own changes behaviour. My cartoons are part of a wider discourse that may have some influence on what people do.

When I went to New York on a Fulbright Scholarship, South Africa was still suffering under apartheid. I had been involved in the liberation movement for six years and always intended to go home. While I was away, things were more momentous than I could have imagined.

The African National Congress was unbanned and Mandela and other leaders were released. I then wanted even more to come back and take part in the changes that were happening.

What did you learn from your stay overseas ? What is the perception of SA abroad ?

One thing that became clear to me while I was in America was that their political movement was incredibly diverse, but this diversity meant they didn’t seem to have much direction. On the other hand, we in South Africa had less diversity but more direction. By far the biggest goal was to overcome the apartheid regime, but this over-arching goal often prevented us, and I certainly include myself, from tackling many other issues.

Things have changed enormously in the past fifteen years as we have become a more “normal” society. Things are in many ways more nuanced and complicated, and in some respects the single-minded directedness has been diluted. At the same time, the perception of South Africa abroad has changed hugely. We were a pariah state. I think the rest of the world takes less interest in South Africa now and we have to work out our own problems.

How important do you consider your cartoons ? In other words, do you think having any influence on political behaviour/leader ?

It’s hard to say how much influence the cartoons have on political leaders. I know that they take note of them which presumably means that on occasion a cartoon could temper someone’s behaviour. I am being sued for a massive amount (the equivalent of $2 million which is twice as much as any cartoonist has previously been sued for) by South Africa’s former deputy-President Jacob Zuma, who wants to become our next President.

I will not allow this to stand in the way of my being heavily critical of him. Some politicians really enjoy seeing themselves in cartoons and some don’t care how critical the cartoons are because they are so narcissistic that any publicity is good publicity. I draw the cartoons less for the politicians, and more for the public.

Do you feel confident in SA freedom media for the future ? What is it the most important threat according to you ?

As a cartoonist I have had a fantastically free run over the past decade and a half and I see no reason why this should not continue. I have hardly ever been seriously censored by my editors. Usually if there’s any kind of problem, we work it out at the idea stage and sometimes the process of close scrutiny actually makes the cartoon stronger even if I have to leave out certain problematic words. The editors leave me to my own devices when it comes to the images I use.

I think the print media generally has been very free. Of course, the massive defamation lawsuit by Jacob Zuma against me and other media people could change things, but somehow I doubt it, and if it does go all the way to the Constitutional Court, I am convinced the freedom of expression will trump his pathetically dented ego.

The biggest threat to freedom of expression is in the electronic media, specifically the national broadcaster, where a Stalinist hack named Snuki Zikalala is head of news and is increasingly getting a stranglehold on what gets broadcast. He, and some others on the board of the South African Broadcasting Corporation, put the “national interest”, whatever the heck they think that is, ahead of freedom of expression.

Your message to convince people to come to South Africa and visit Cape Town ?

South Africa is an exciting place to be and to work. We have more issues in a week than some other places have in months. Working out how to change things after hundreds of years of oppression is complex and conflicted. Bizarre things happen all the time.

But I think we’ve done pretty well and although I criticise as hard as I can, I’m optimistic. Cape Town is one of the most beautiful cities in the world (although it’s still very racially divided) and definitely a great place to visit. South Africa is going to battle to get transport systems and security up to scratch for the 2010 Soccer World Cup, but I’m sure we’ll get it together and thousands of people will pitch up and have a great time.